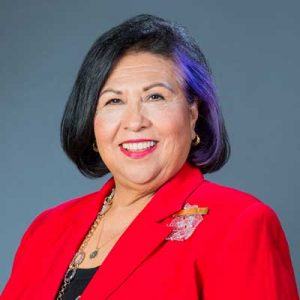 Molina grew up as one of ten children in the Los Angeles suburb of Pico Rivera, California, United States, to a Mexican-American father and Mexican mother. She attended public schools in her hometown and attended Rio Hondo College, East Los Angeles College and California State University, Los Angeles. While attending college, she worked full-time as a legal secretary. Then, she became certified as an adult education instructor and taught clerical skills at the East Los Angeles Skills Center.

Molina’s early career was characterized by her involvement in the Chicano movement and advocating for women’s health. An early accomplishment of Molina’s was when she started a nurse mentoring program in an effort to address the country’s shortage of nurses by partnering with local community colleges to encourage and help more students to pursue a nursing degree.

One of Molina’s significant achievements was her involvement with the Mothers of East Los Angeles, a group formed to organize against a proposed plan to build a prison in East LA. As city councilwoman, she found the government unresponsive to her concerns of yet another proposal to build a prison near schools in the predominantly Chicano and Mexican neighborhood. In the mid-2000s she drove through skid row looking for families with children and would call the Department of Family and Children Services to help families and remove children from unsafe conditions.

In April 2006, Molina was honored as the “Hispanic Business Woman of the Year” by Hispanic Business magazine. In 2008, Molina piloted a program that became known as the Gloria Molina Foster Youth Education Program. This program attempted to improve the high school graduation rates of students in the foster care system. By committing social worker’s to aid in helping manage and track these student’s academic success the program was able to raise the graduation rate from the national average of 58% to 80%. When Molina retired from her supervisor position in 2014 because of term limits, she stated that one of her biggest regrets was that she was not able to do more to improve the high school graduation rates among fostered youth.

In 2014, Molina was awarded the honorary Doctor of Humane Letters (LHD) from Whittier College.